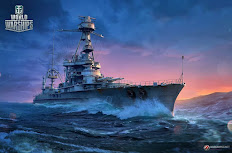 World of Warships is an  MMO  project from Wargaming dedicated  to warships  of the Second World War. Yes, the developers swung at three elements at once: earth ( World of Tanks ), air (World of Warplanes) and water (World of Warships). Fans of this series will already seem familiar with the credits used in World of Tanks and World of Warplanes, which will allow you to quickly acclimate and unite three accounts.
The graphics capabilities of the game are at the highest level, and the dynamic weather changes and realistic maps make the game especially enjoyable. Dare and take part in the largest sea battle online!

All the beauty of the game is in a huge selection of realistic ship models. Famous aircraft carriers, battleships, cruisers and many others have been recreated in the smallest detail in the virtual space. At the same time, there are branches of their development, which means that each ship can be improved at its discretion.
At the very beginning, the player has a chance to choose which country he will fight on, and each country has its own available fleet list.
The authors of the game are constantly adding new nations and replenishing the project with new content. In this regard, even a seasoned sailor will always be interested in trying something new.