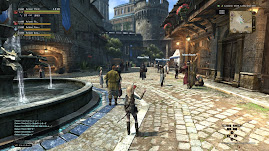 The gameplay begins with the creation of a hero. Almost everything can be changed in appearance thanks to the advanced character creation editor. Plus, you will definitely appreciate the large selection of races and classes. Each is unique in its own way and has different bonuses. In the future, you will form a personal set of skills and characteristics, as well as your own backstory.
Neverwinter attracts with the fact that you get into the game almost from the first minutes, without exhausting training or studying all kinds of forums. Riddles, quests, bosses - all this is available even for beginners, although  it will be possible to participate in events,  PvP battles and trips to dungeons a little later.
The world of Neverwinter is so big that the developers had to abandon seamlessness. These are trifles, because in general the project is of high quality and undoubtedly pleases with the combat system and a really interesting plot. We will pump the hero on quests, and not on mindlessly killing thousands of mobs. This will allow you to carefully study the wonderful universe with its