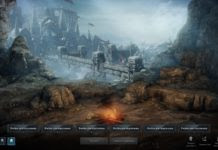 Lost Ark is a long-awaited large-scale project that is designed to revolutionize your idea of ​​the MMORPG genre. A rich open world with a stunning story and an enjoyable combat system awaits you. At the heart of the game is the high-quality Unreal Engine 3, which reveals ample opportunities in the gameplay. Just think: over 150 people worked on the project! Lost Ark has already conquered the hearts of the Asian region, and is ready to open its doors to Russian gamers.
Literally from the very beginning, you get to know the main feature of the project - classes. There are 18 (!) Of them in the game, while each of the classes is truly unique and has its own advantages. The skill development system allows you to pump the hero in a variety of directions, including the element, effect, area of ​​action and others. Forget about the classic division of characters into healers, tanks and damage dealers! With such an abundance of classes, the formation of raids takes quite unexpected turns.
Of course, like most MMORPG projects, Lost Ark has a whole profession system. However, here, too, the developers managed to bring a lot of new things. So, for example, in the list of professions you will find an archaeologist and even an astronomer! In addition, players can unite in the development of their professional skills.Particular attention should be paid to the Lost Ark universe itself. It is full of riddles and secrets, which can only be solved by fulfilling a number of conditions. Some objects in the world are interactive, and the most incredible events take place in the locations in a random way and according to the scenario.